The benefits of neutering your cat 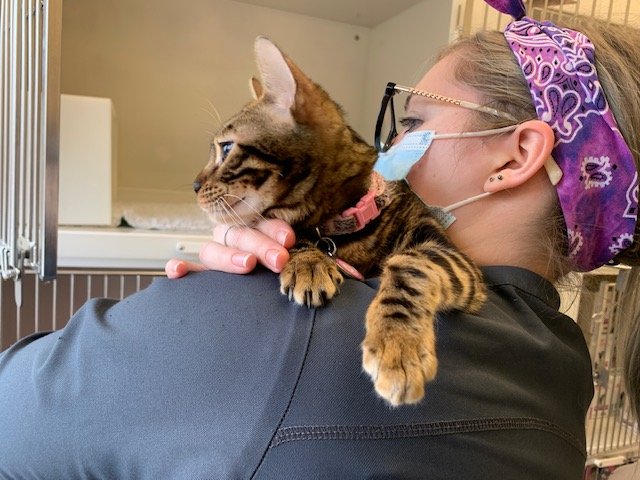 This is beautiful Bengal Darcey May who was in to see us recently to be spayed. Here she is having a cuddle with our student nurse Alanna post-op, and both look as though they’ve spotted something very interesting from the window in our cat ward!

We strongly recommend neutering if you are not planning to breed from your cat. Not only does this prevent unwanted pregnancies in females and stops males from contributing to the feral cat population, but there are lots of health and wellbeing benefits too.

Unspayed female cats go into heat several times a year. Neutering prevents associated unwanted behaviours such as yowling and spraying and also means there’s no need to keep your cat indoors for several durations during the year. Being stuck inside can be very frustrating for a female cat on heat! Cats which are spayed before their first season also have much less chance of developing mammary cancer and neutered cats are at no risk from developing pyometra (a life-threatening infected womb condition) as their womb has been removed.

Neutering male cats helps curb negative behaviours such as marking their territory and fighting. Fighting injuries, particularly cat bites, can turn into painful infected abscesses and can also transmit disease from cat to cat. Roaming can be a big problem in entire males as well as staying away from home for days on end. This desire to wander makes entire male cats more at risk of becoming lost or being involved in a road traffic accident.

Did you know that neutering also generally makes cats more friendly and affectionate towards their owners?